Jane* grew up in a single-parent home. Her mother worked hard to provide for them and always made sure Jane had what she needed. After graduating from high school, Jane took a full-time job. She continued living with her mother and began contributing a little of her earnings towards the monthly expenses. The rest of her check she spent before the next payday.

Within six months of receiving a cancer diagnosis, Jane’s mother – her only family – was dead. Young Jane was suddenly on her own. Without her mother’s support, Jane soon became homeless.

She lived where she could, couch-surfing with friends and, when necessary, sleeping in her car. When her employer learned her situation, they referred Jane to Hillcrest Platte County.

Jane realized she had no control over her life. She was just surviving and accepted the help Hillcrest offered. After entering Hillcrest’s Young Adult Program, Jane was assigned a case manager, a budget counselor, life skills classes, and an apartment sponsor. They became her tribe.

She met weekly with her case manager to review her goals and progress towards achieving them. Before each meeting, she prepared her documents and wrote down any questions or needs she wanted to discuss.

Every Tuesday evening, Jane attended life skills classes to assist her journey to self-sufficiency. She enjoyed the lessons and discussions with others in the program. She also regained confidence in herself.

She met weekly with her budget counselor to review her income and expenses. They worked together to set her budget and manage her money. 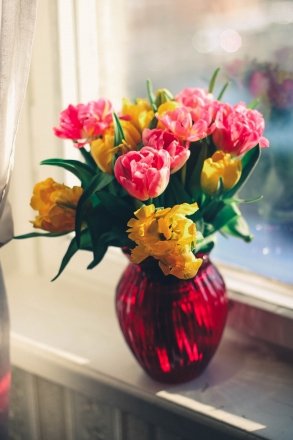 When Jane moved into her apartment, she found a vase of fresh, brightly colored flowers and a small note card with her name on it. Inside the card was this message, “Hi Jane! I’m Mary**. I will be bringing your welcome meal and a few other items to help you feel at home. Please text or call me when you can.”

Jane’s case manager had told her that churches sponsored most of their apartments, and someone from her sponsoring church would be contacting her. She hadn’t had a home-cooked meal in weeks, and it sounded pretty good. She sent a text to the number Mary had left on the note.

Several hours later, there was a tap at her door, and she opened it to find a smiling face holding a cardboard box and carrying several grocery bags. During their text conversation, Mary had asked Jane if she could also bring over a few items to stock her pantry and refrigerator. Jane had been surprised when Mary asked about her favorite foods, not just bread, milk, and eggs. The grocery bags contained some of her favorite snacks and comfort foods. In the box were two square pans of enchiladas – one ready to eat and the other ready to freeze for a later meal.

Mary chatted with Jane as they put away the groceries. She shared a little about herself and let Jane know she was there for her. Mary would check in with her once a week to see how Jane was doing. Mary also told Jane that she and her small group at church knew she had been through a lot, and they would be praying for her comfort and success.

Jane lived at Hillcrest for six months and learned to take control of her life. She also learned how it felt to be loved unconditionally by a stranger who provided encouragement, support, and a sense of belonging. Of course, by the time Jane graduated from Hillcrest, Mary was no longer a stranger. They had built a relationship that continued beyond graduation.

Hillcrest Platte County provides a helping hand to many of the areas homeless. What sets Hillcrest apart from other housing programs in the area is You.

As Christians, our calling is to build connections with those around us by showing the love of Jesus. Sometimes we show that love with a phone call to a resident in a transitional housing apartment. A call where you listen to their struggles and provide encouragement. Sometimes it’s an email that shares positive scriptures and asks if there is anything you can do for them. Or, it’s a gift card to a local restaurant so your resident can experience their first meal out in a very long time.

If you are called to show God’s love through human connection and would like more information regarding apartment sponsorship, contact Rebecca Sayre at rebecca@hillcrestplatte.org or (816) 877-4397.

Peggy Staver is a former budget counselor for HPC. She blogs at her personal site and writes content for non-profits and small business websites. You can find her at https://www.peggystaver.com/nonprofit-copywriter/

Leadership, Fundraising, Support, Referral Source – Ways I give back to Hillcrest

Hillcrest Platte County tops the list of organizations I support because they make a difference in our community. I appreciate how it empowers people to be their best selves by taking responsibility. Everybody comes across hard times. HPC assists people in getting over the hump and on the road to financial and personal recovery.

I love how HPC serves as a connector between agencies as well. They partner with the Platte County Economic Development Council in communicating their services to member employers and building employment partners for program participants. Some of the other agencies who partner with HPC are the Full Employment Council, Platte County Health Department, Synergy Services, and Northland Miracles. If HPC can‘t help, they have a resource list of other area agencies.

I have seen firsthand how well the program works. I recently noticed a homeless woman utilizing the public building where I work to hang out in when off work. It was winter – cold and snowy outside. She was employed and showed up for work every day, but she‘d had some hard knocks and was trying to survive as best she knew how. I knew she was seeking shelter any place she could at night, and still I could not bear the thought of her sleeping outside in the dead of winter. Because I knew the work and mission of HPC, I put her in touch with them.

I am so proud to know that she graduated from the program, improved her employment, and is moving into Tier II housing, a less structured environment within the organization giving her the opportunity to continue to work toward the goals she set during her initial residence.

The piece that really tugs at my heart is HPC‘s work with homeless young adults. How can that be? Young adults without a home? The Kansas City area has a growing population of foster kids aging out of the system, kids kicked out of homes and young moms with kids out on their own. I so appreciate HPC taking on the task of addressing the problem.

I believe so strongly in the program that I did a Facebook fundraiser for my birthday––a first for me! It was easy to set up and in a couple of days, I increased my goal twice. I didn‘t know what kind of response to expect from my Facebook friends, so I was delighted when the end result was $320 raised! It was a rewarding first time out, and it sure beats raising money via a bake sale; you don‘t want me to bake anyway. Ha!

I would encourage readers to volunteer their time and talents to help in the mission of providing a hand up to working homeless families and individuals or to sponsor a Facebook fundraiser as I did. I am honored to serve on the HPC board and so proud of its work and mission.

Alicia Stephens is the Executive Director at Platte County EDC,

She is also on the board of Hillcrest Platte County.

All contributions are eligible for a tax deduction.

How did you hear about Hillcrest? "My daughter-in-law shops quite often at Hillcrest. She mentioned that I might like volunteering at the store."
View on Facebook

Want to volunteer and make a difference at HPC in 2023? Join our family by filling out a volunteer form via #jointhefamily" target="_blank" rel="noreferrer">https://hillcrestplatte.org/volunteer/#jointhefamily | Someone from our team will get in touch! #TransformingLivesHPC